I'm just gonna get right into it!

So, it's kinda cheesy, but I bought a sketch pad just for jotting down ideas in when I think them up. 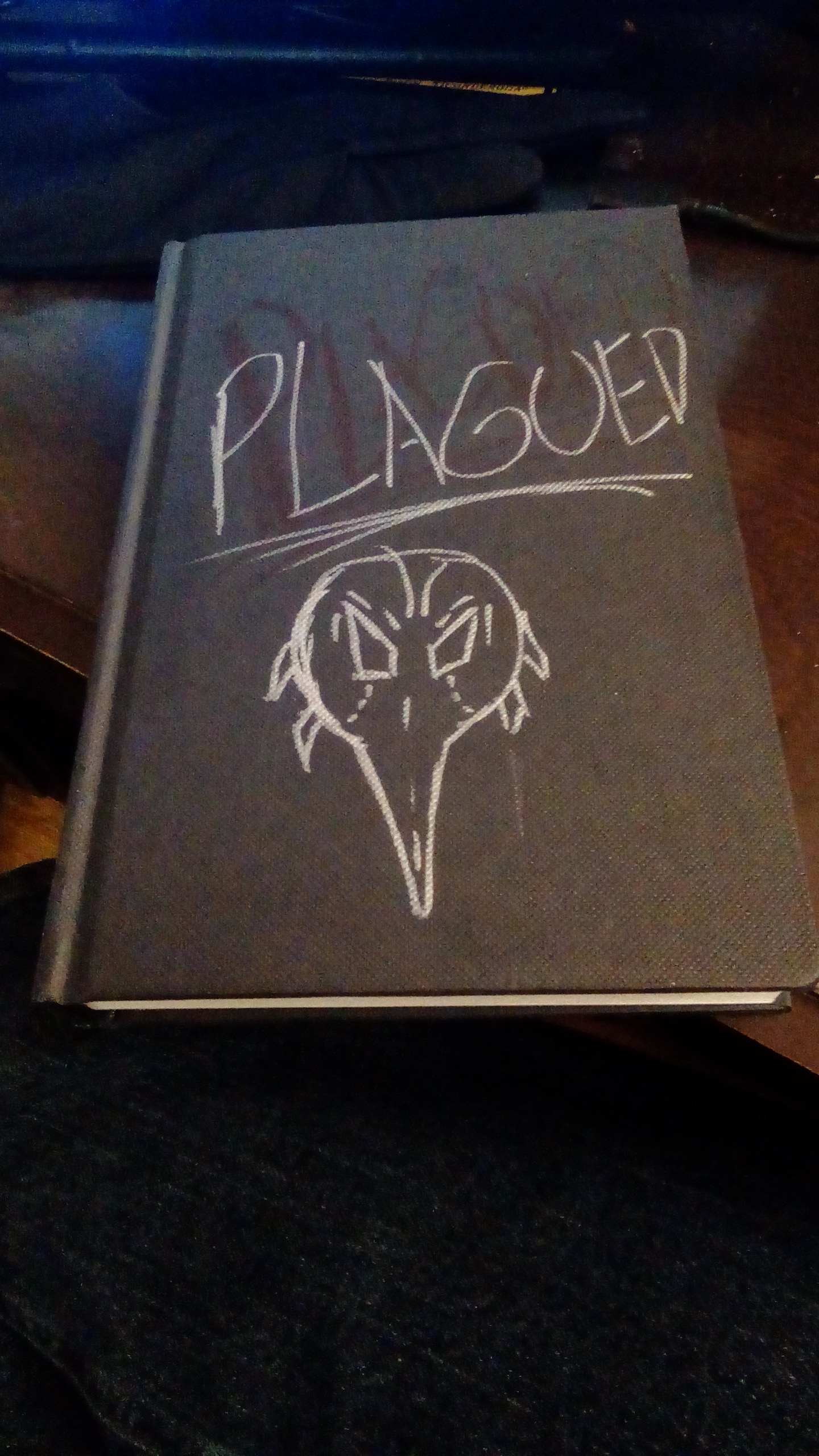 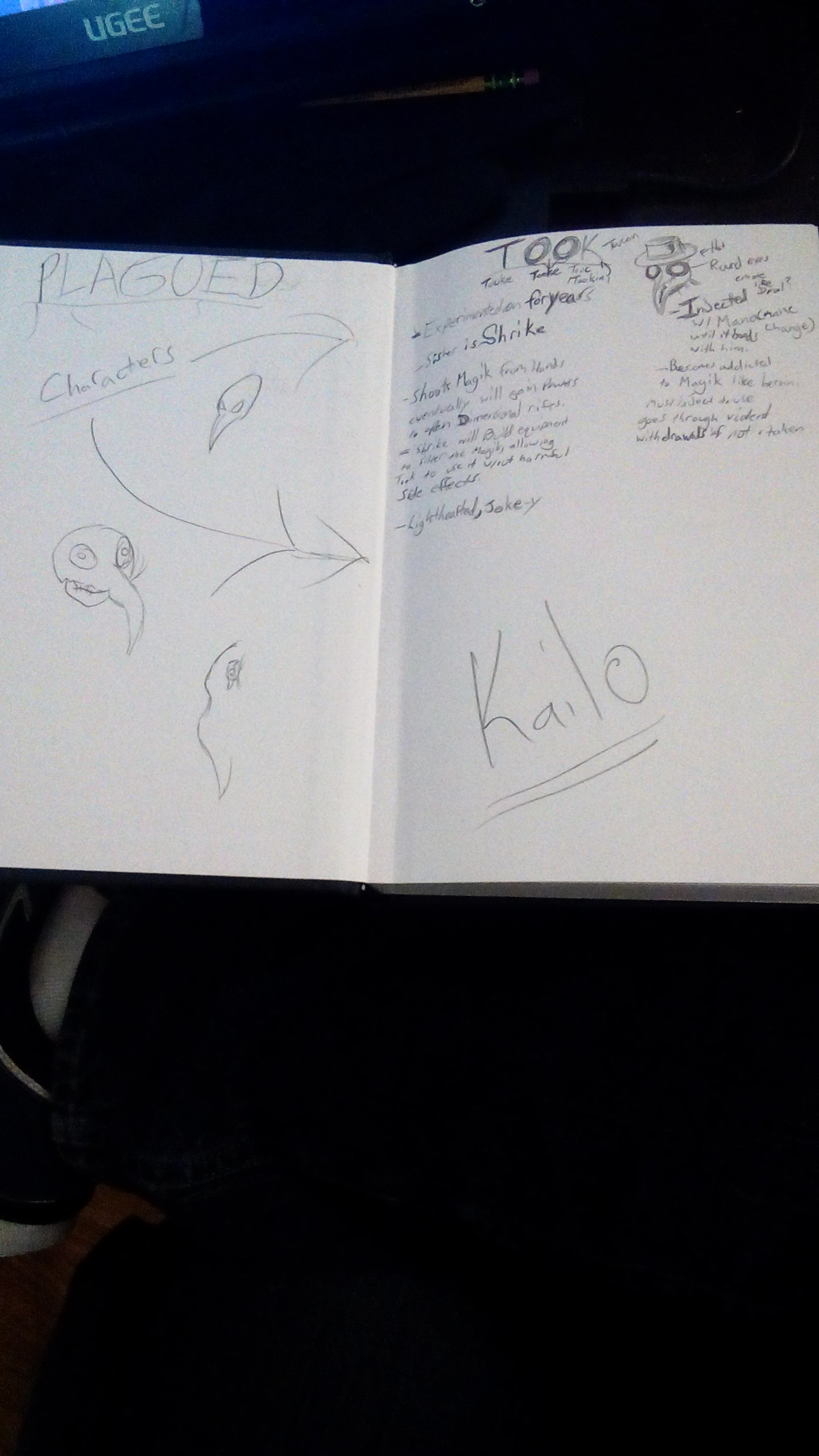 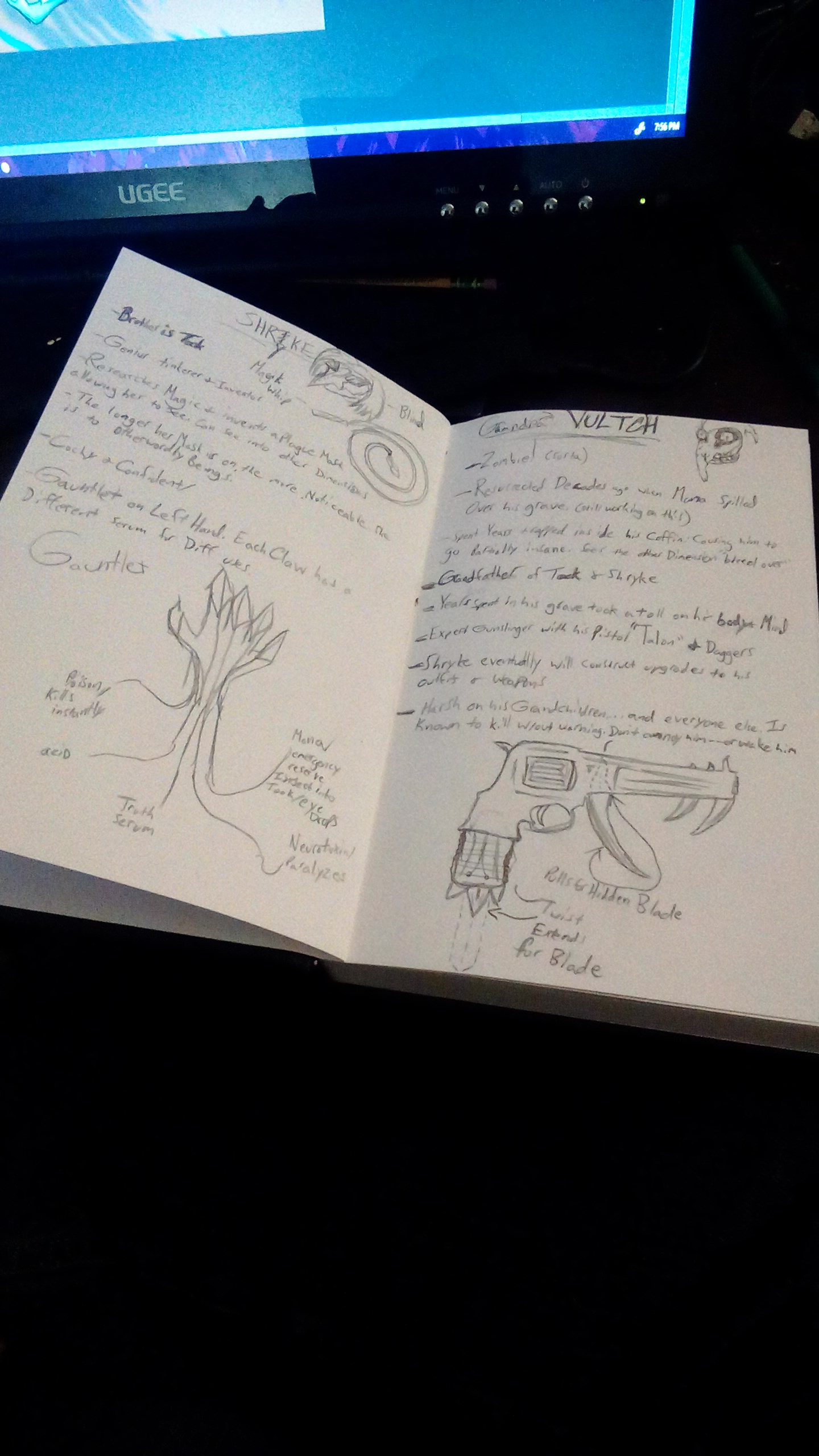 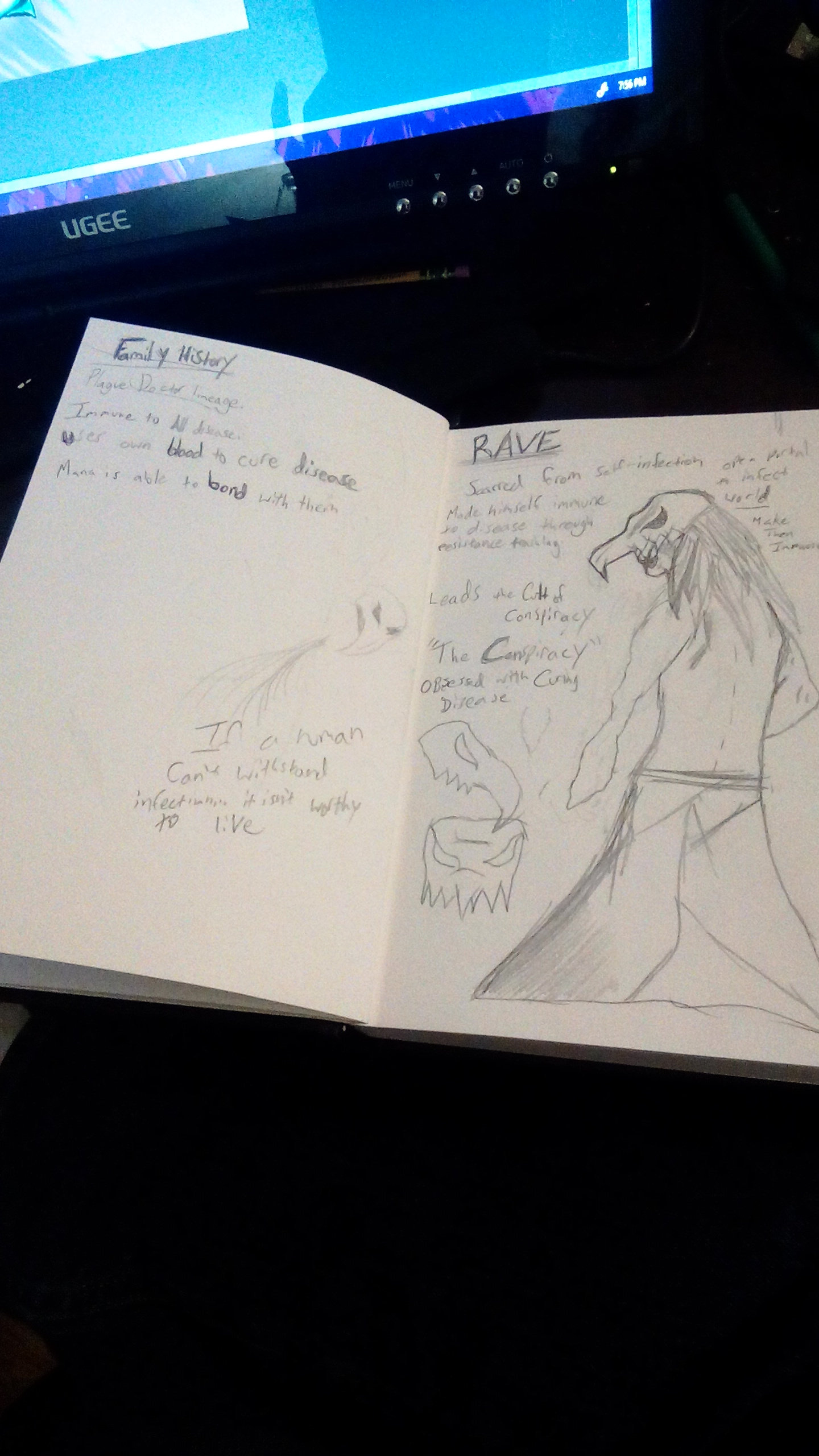 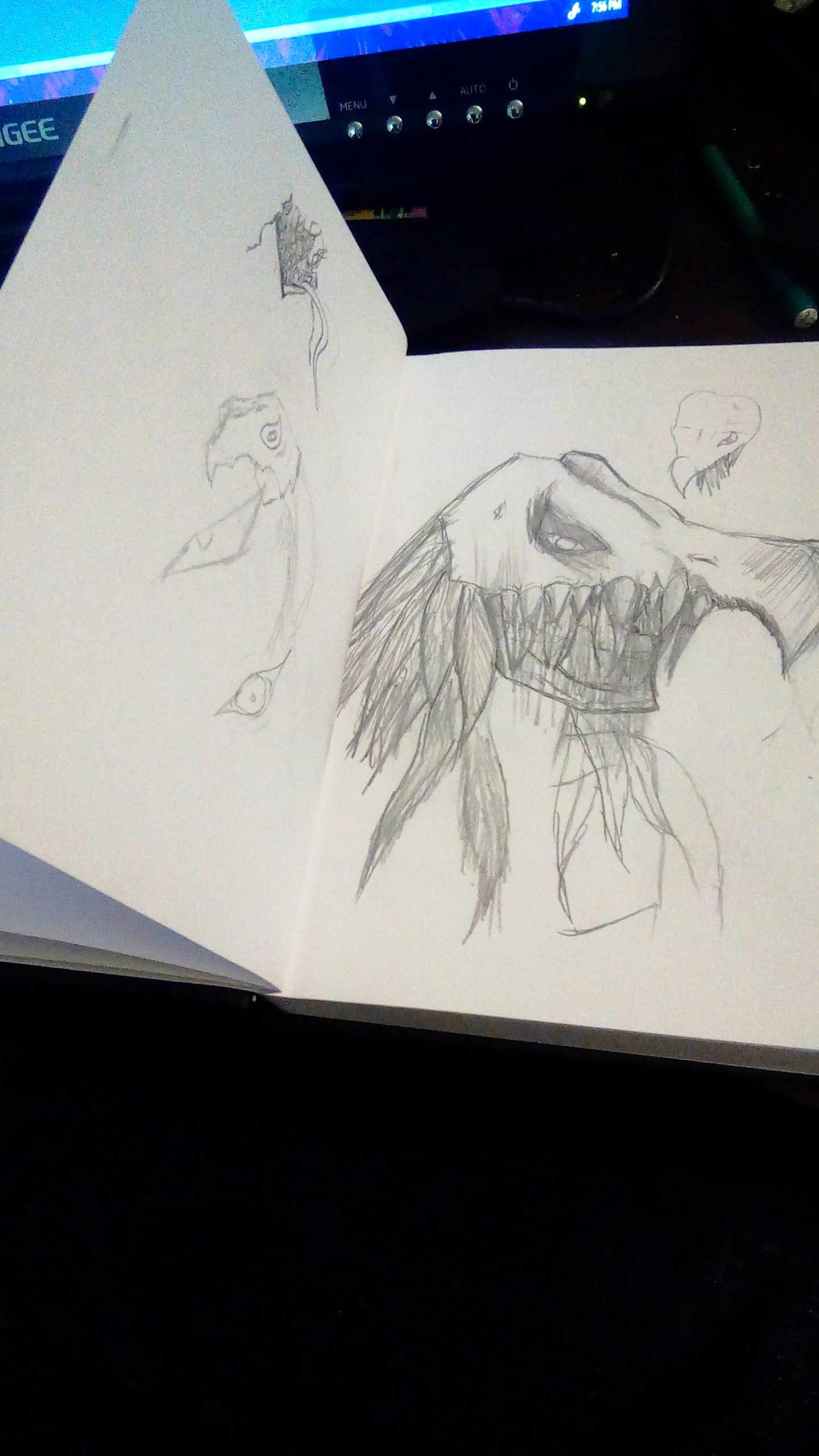 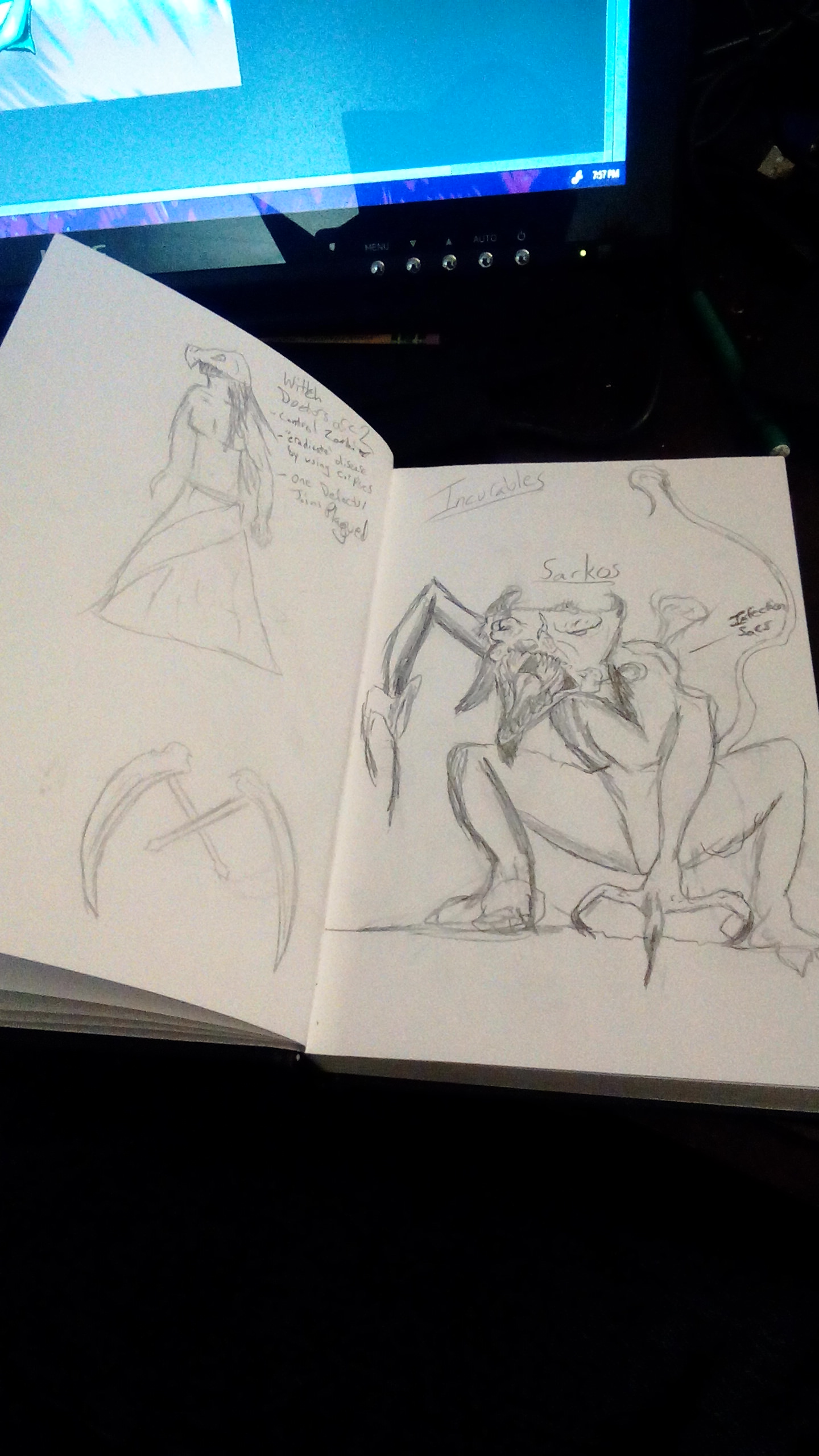 I'm thinking of this project less like a comic book, and more like a video game. I'm giving the characters bosses to fight, and upgrades to receive. 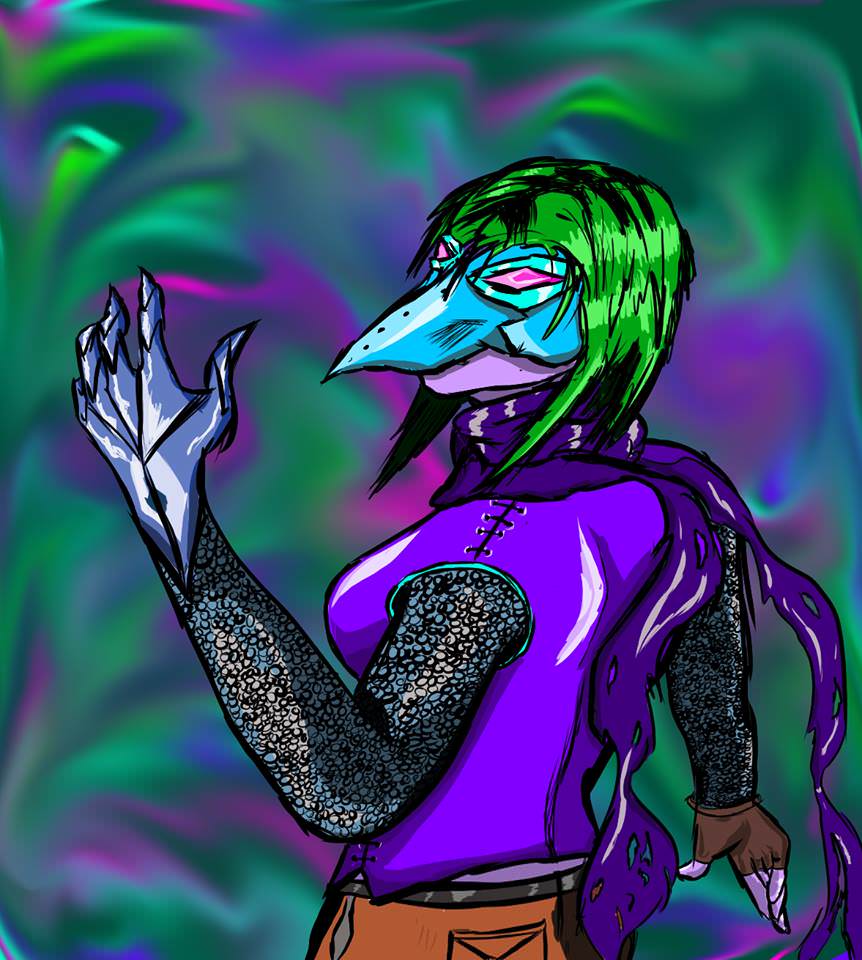 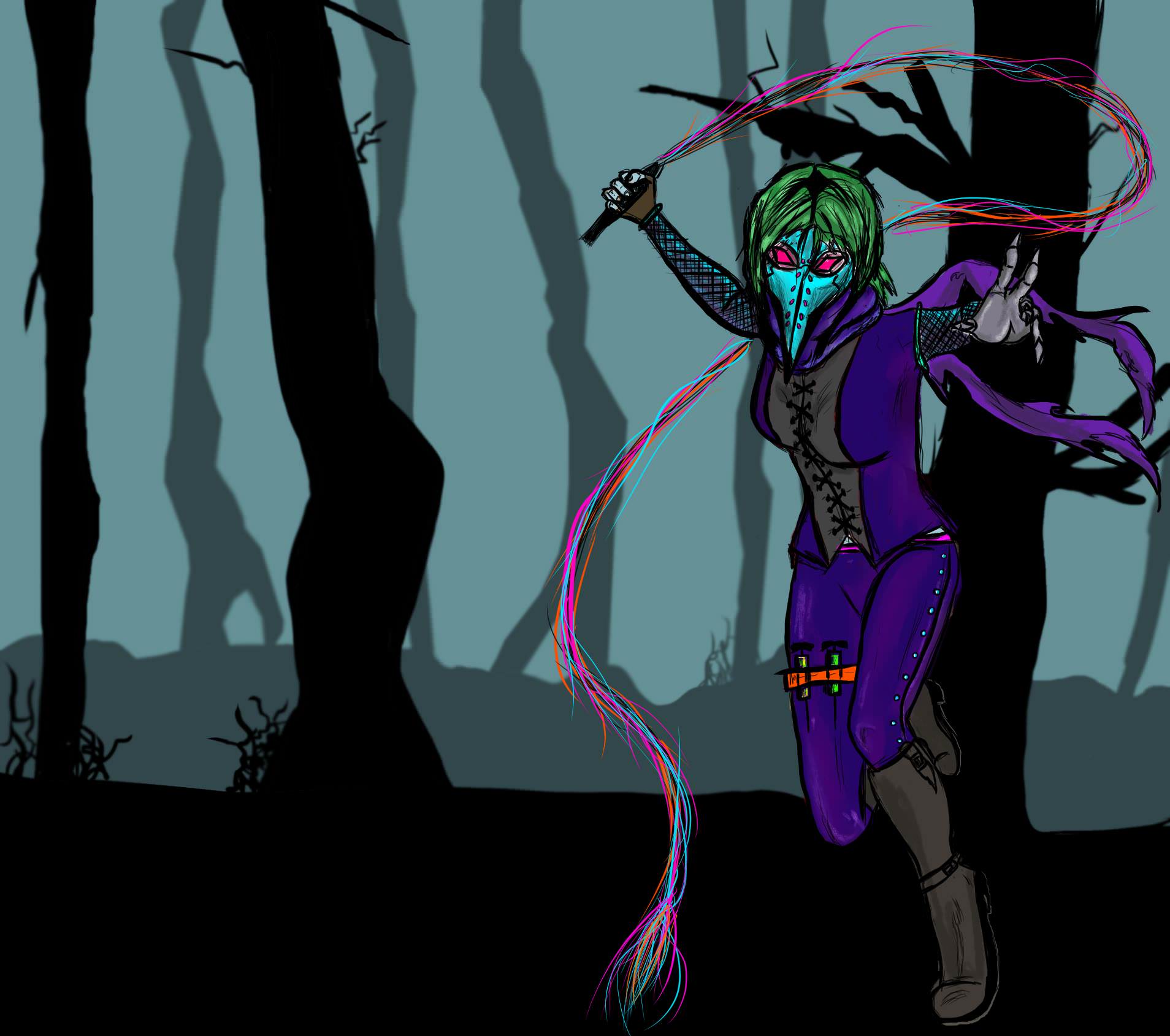 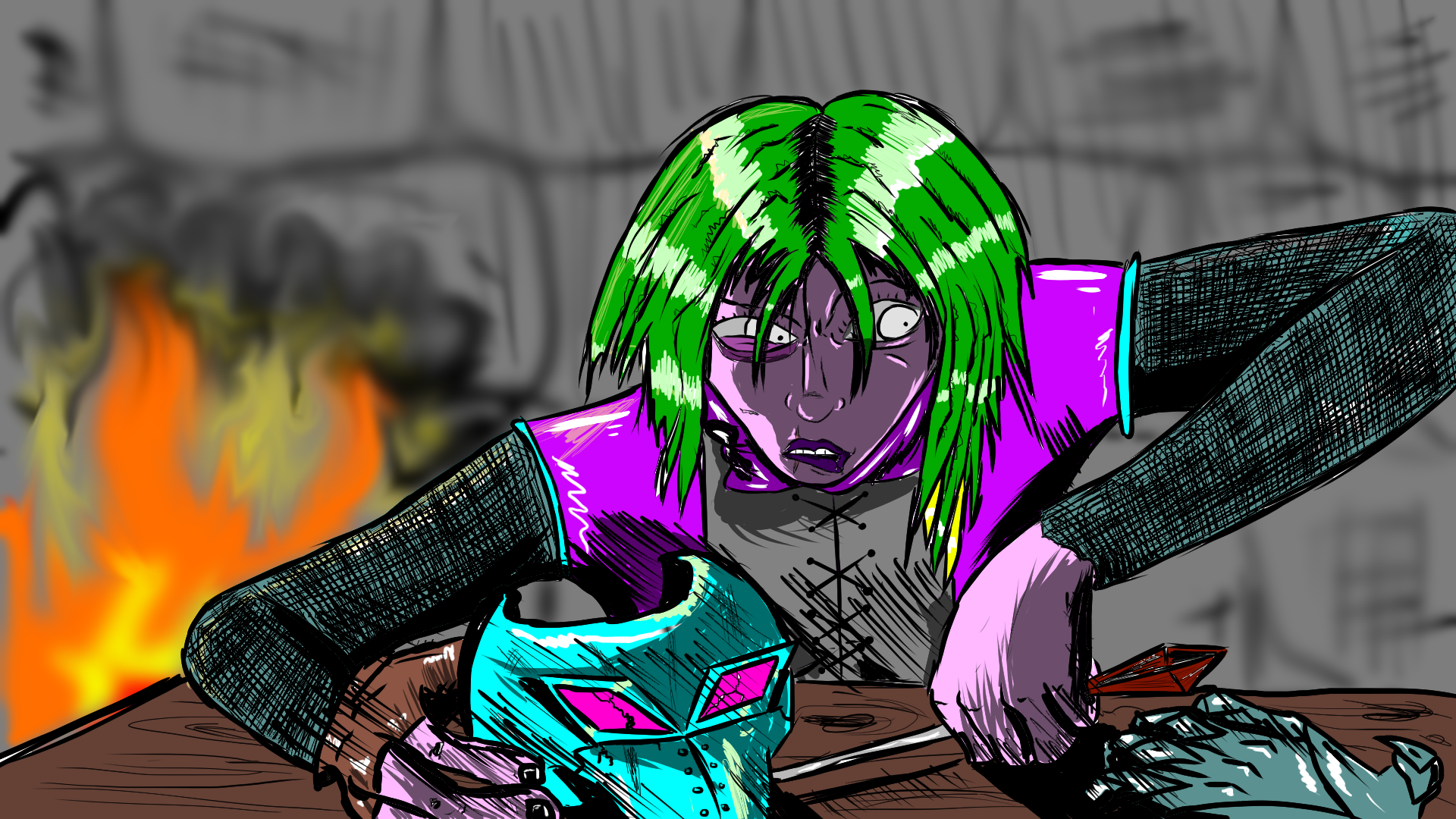 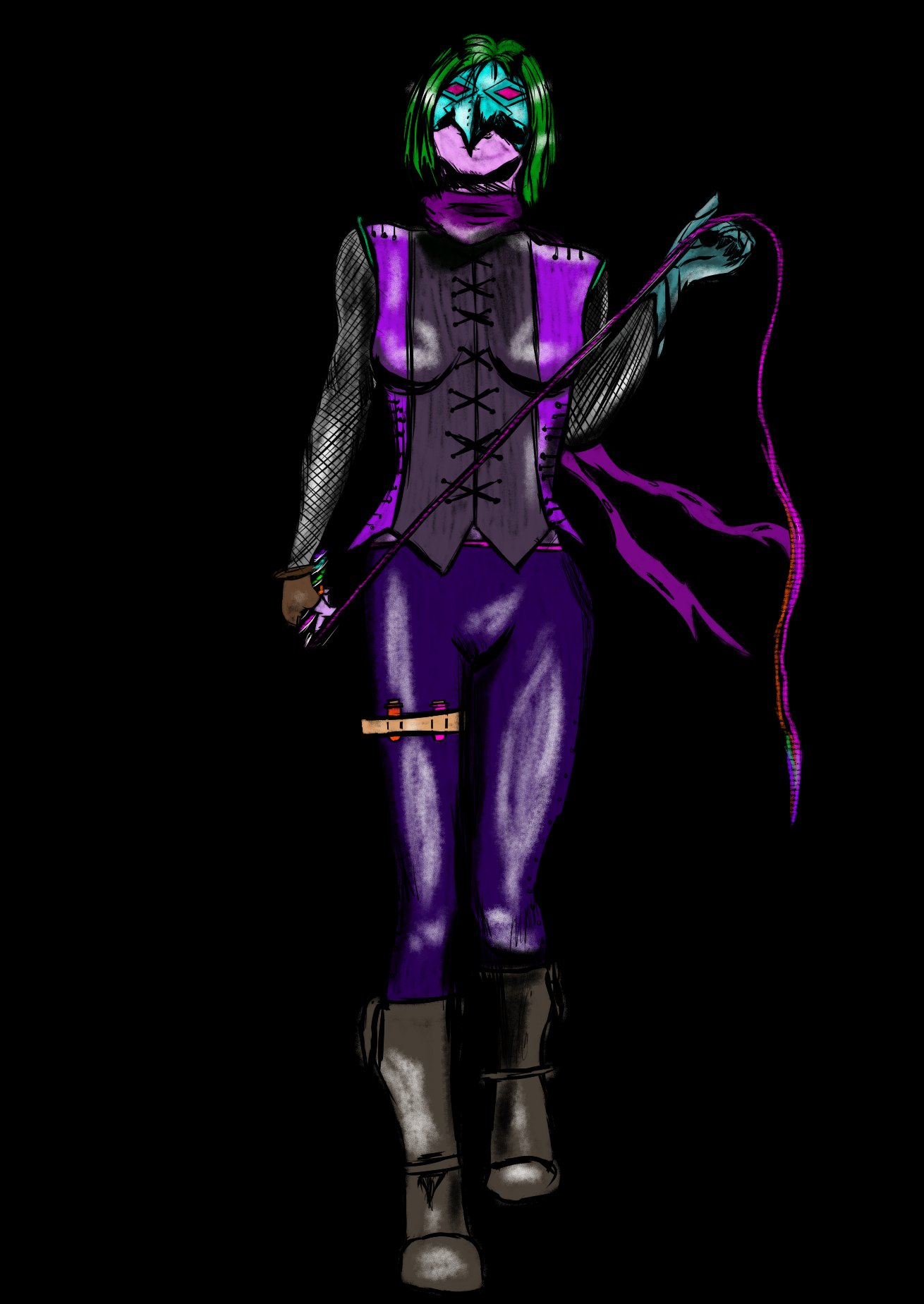 She's blind! And a genius! And uses a whip! Daredevil meets Batman, but not as overly serious. That's one of my goals here. To make things super fun. That's not to say I want to undercut alot of tension with jokes a la Guardians of the Galaxy, but I don't want these characters to be humorless shells either. She constructed her mask in order to see. Being infused with mana, the lenses use the magic in order to give her sight. This is dangerous however as the magic is strong. She not only can see, she can also see beyond our world. The longer she keeps that mask on, the more likely she is to be noticed by the inhabitants of the other dimension. Her weapon of choice is a mana infused whip. She's coming along nicely.

**Name Note: Shrike is named for the bird of the same name. Shrikes are small, carnivorous birds that are known for impaling their victims on thorns or spikes then eating their entrails. 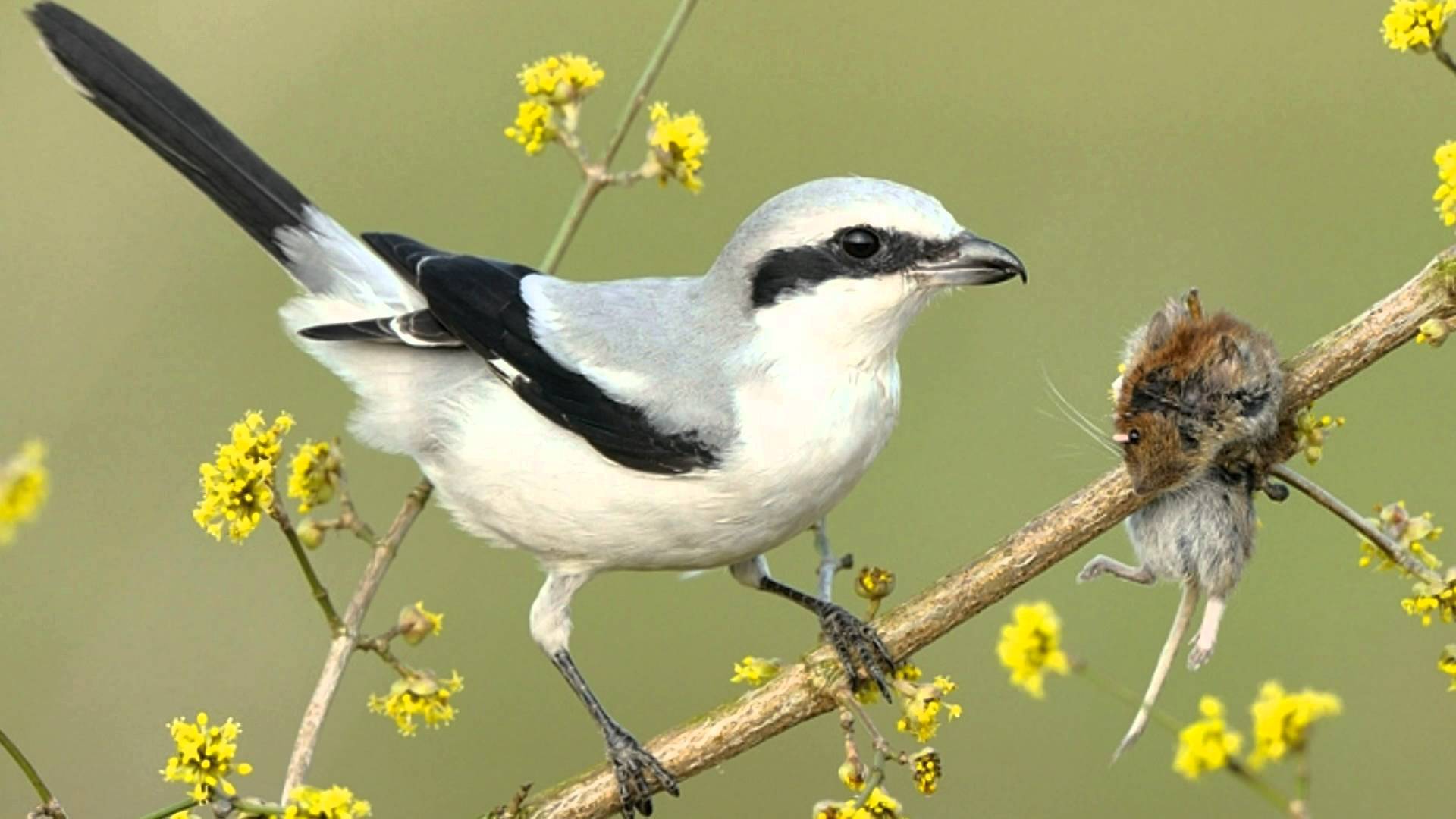 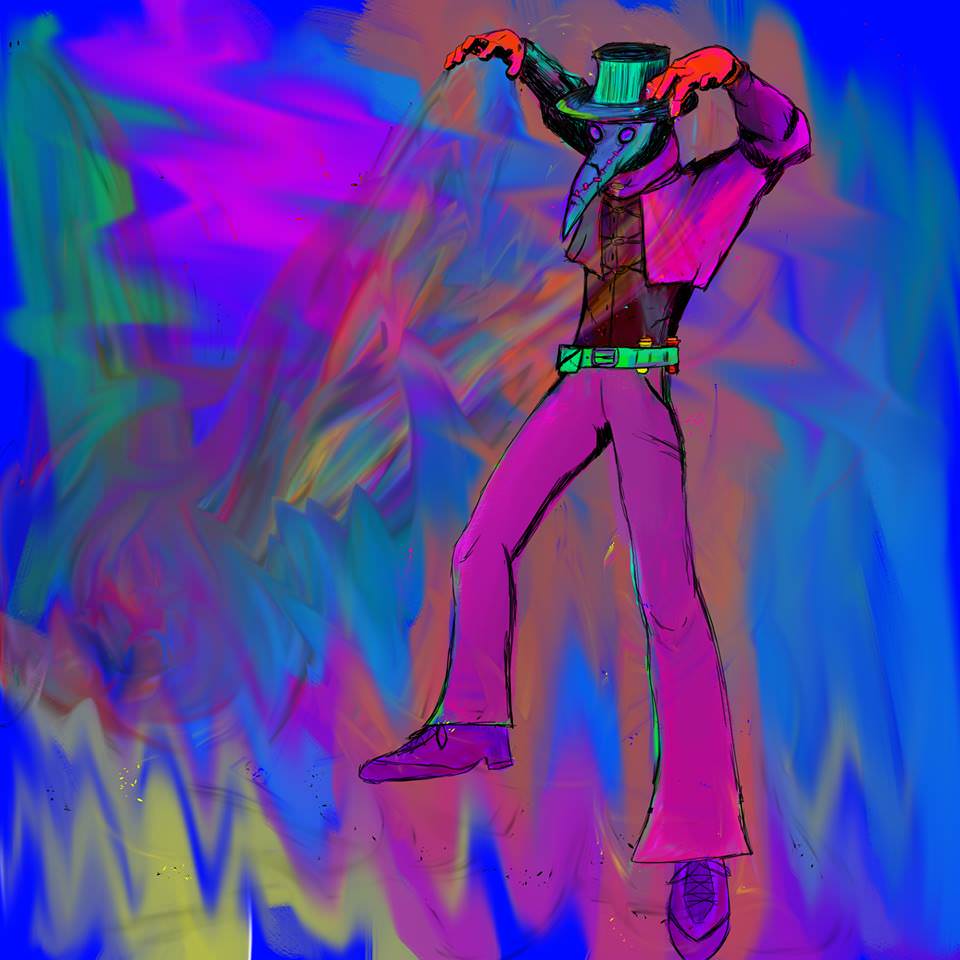 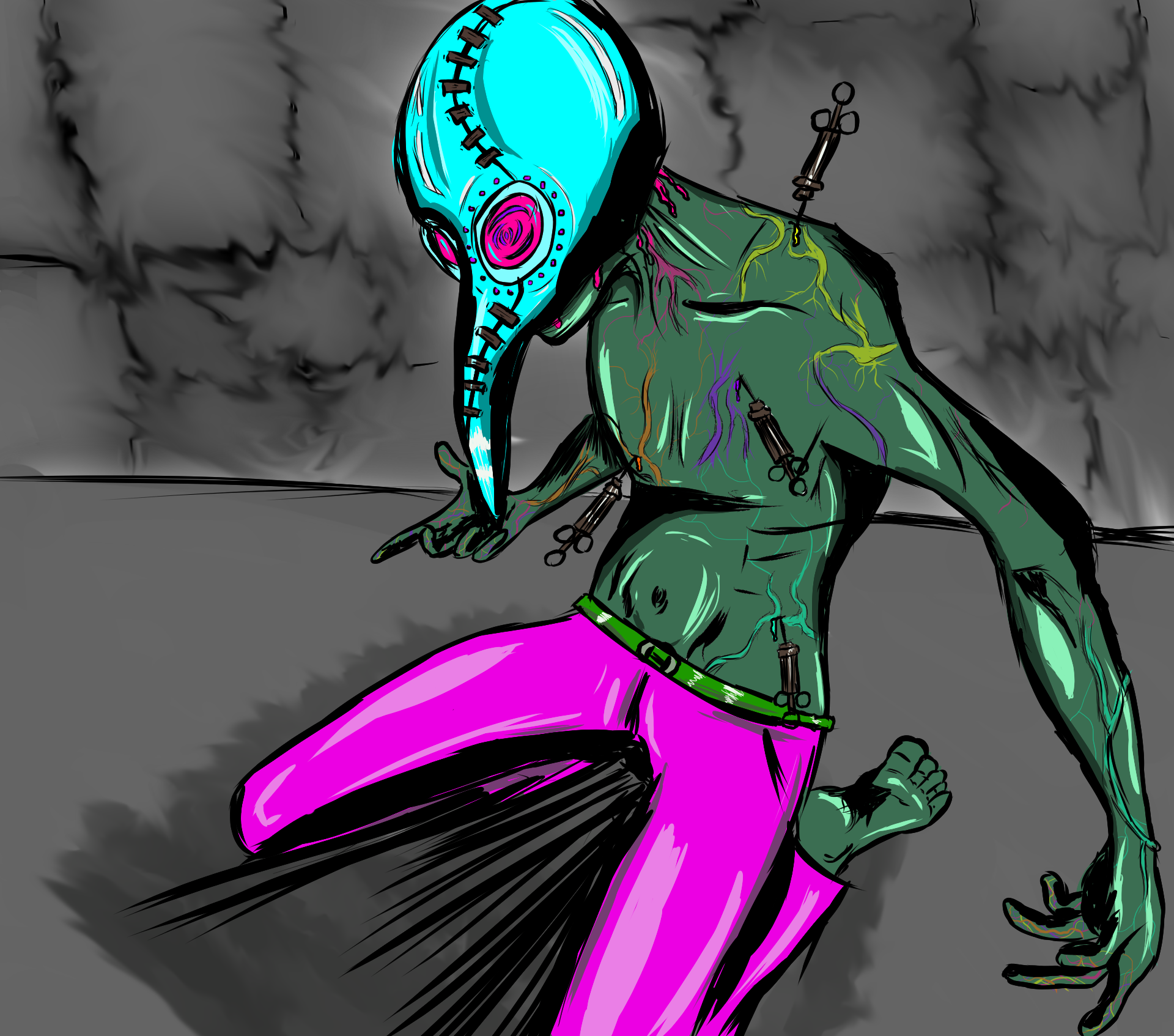 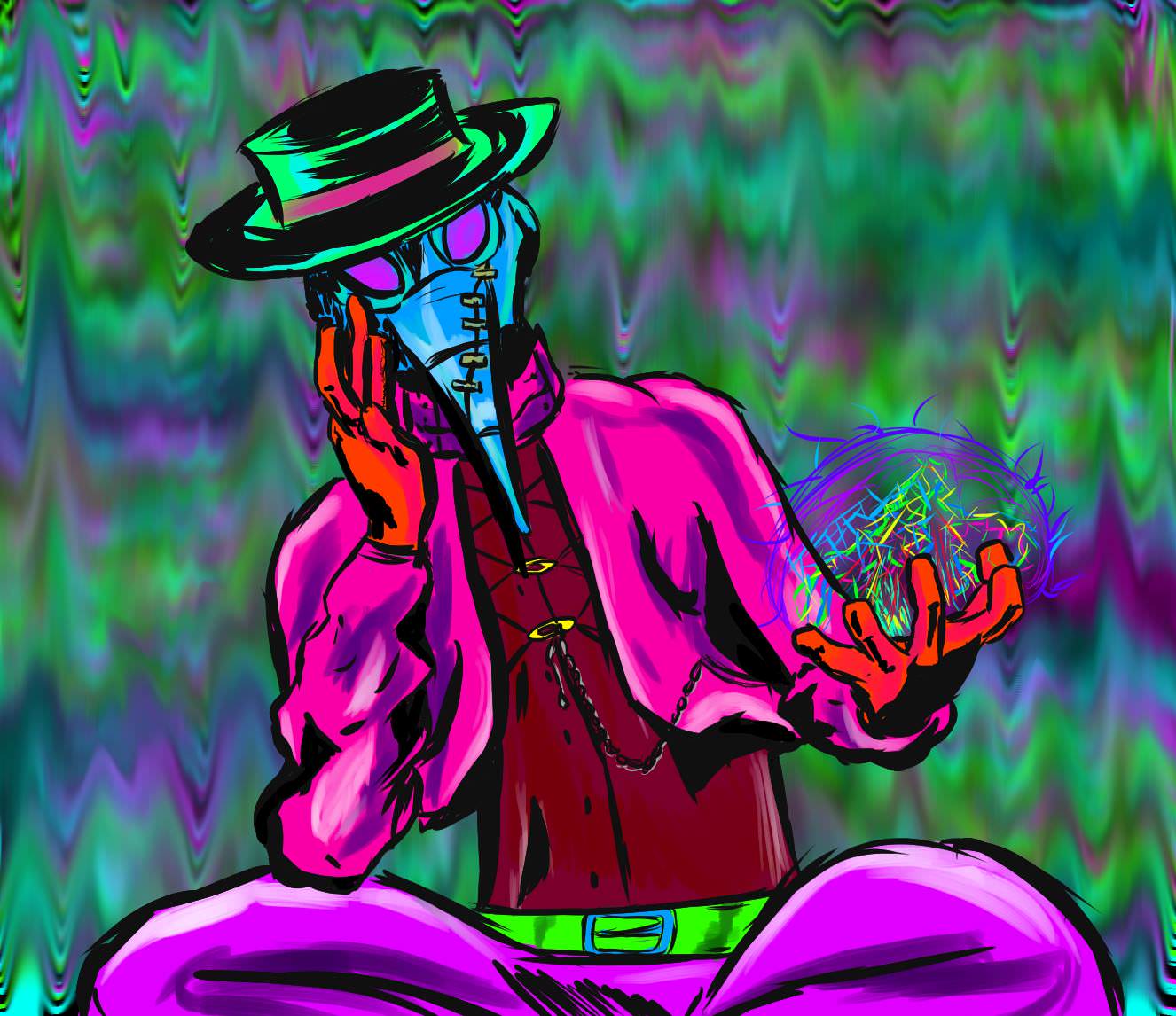 He's the one that started this all. Before I even made them connected or gave them names. Took is Shrike's younger brother. He was kidnapped by a group of cultists, experimented on, and gained a host of magical abilities. One problem: He's addicted to mana now. If he goes without injecting himself with a magical serum, he goes through violent withdrawals. Violent as in, he may literally self destruct. A daily dosage of M keep his powers at bay. Took's magical abilities include telekinesis, chromakinesis (color manipulation), and dimensional ripping (One of his most powerful and dangerous powers).

**Name Note: Took is named after the Toucan. 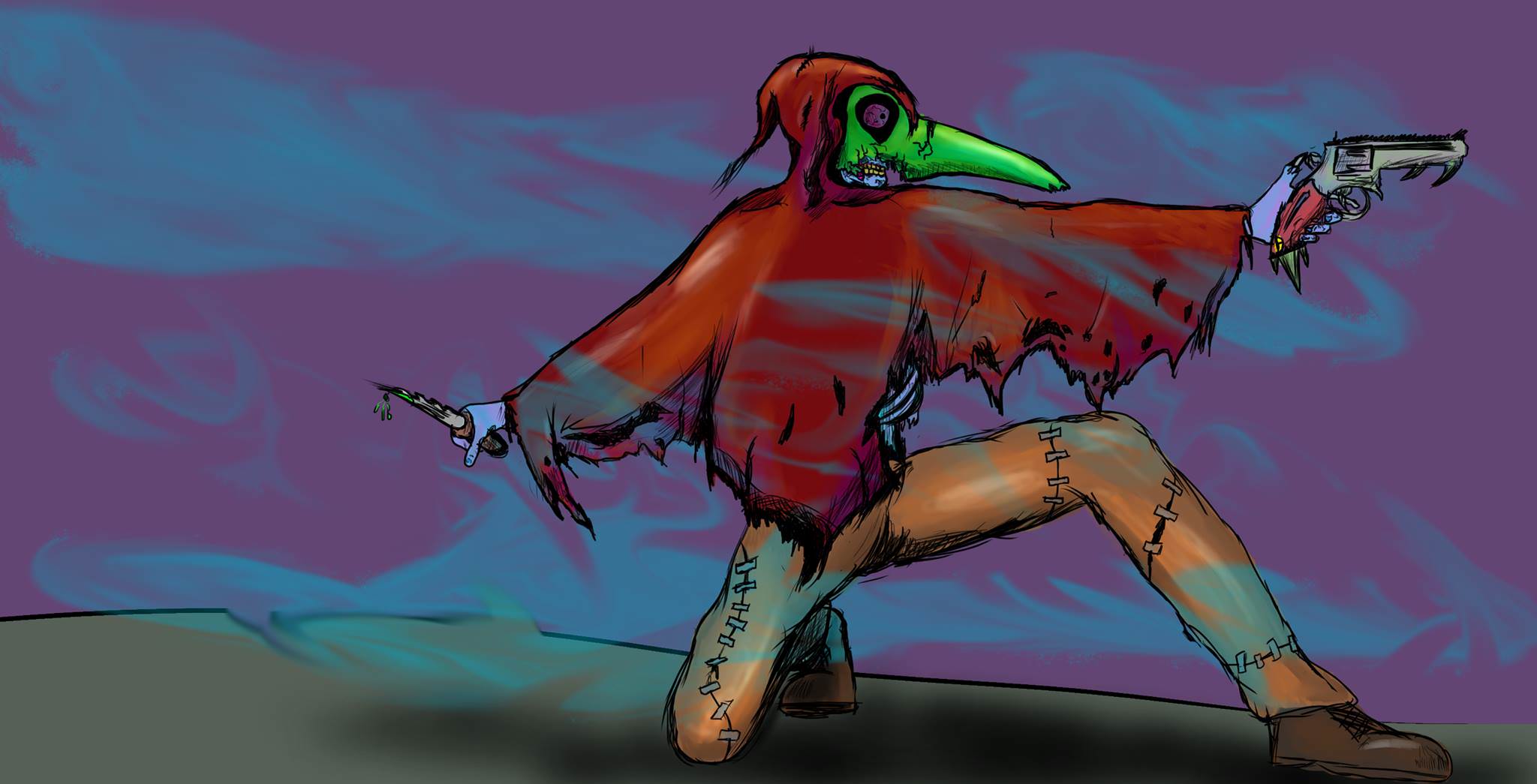 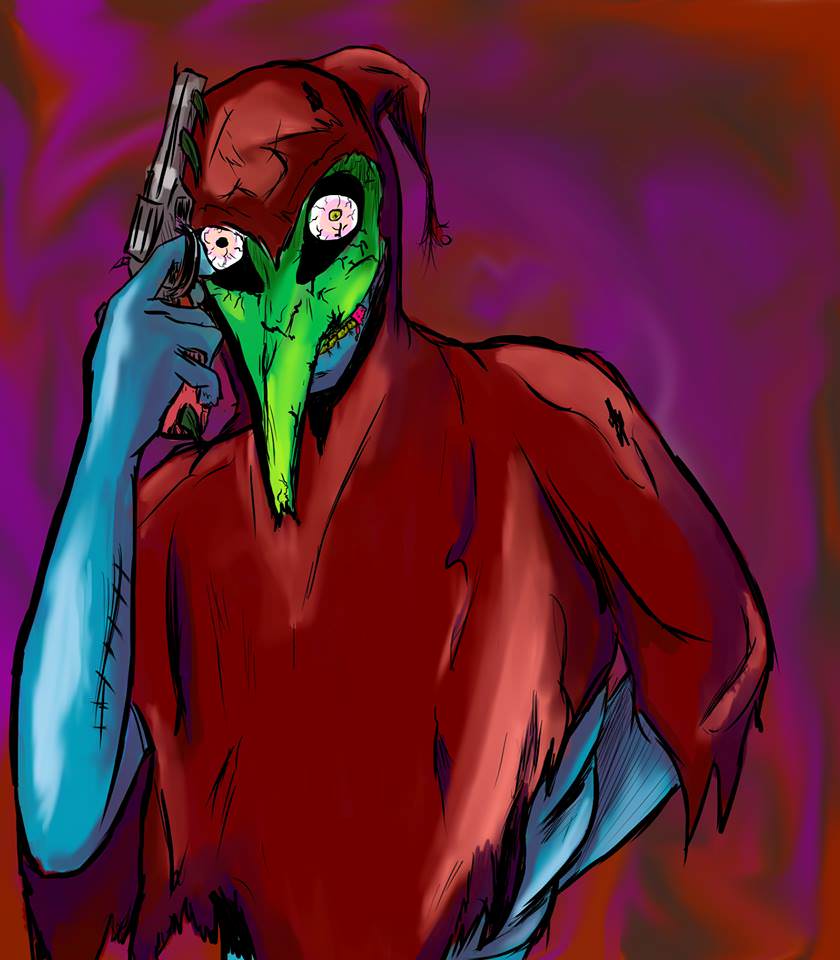 He's insane, undead, and a grandfather. Vultch is the father to Shrike and Took's mother. Having died young (when the siblings' mom was still a child), he doesn't appear much older than his grandkids... at least he wouldn't if he hadn't already spent decades rotting away inside of his casket. After a vat of mana is accidentally dumped on his gravesite, Vultch is resurrected. And also half decayed. If the damage to his brain isn't bad enough, Vultch spends another ten years trapped underground. Unaware of how he has woken back up his mind slips into madness. Fortunately for him a couple of grave robbers were unlucky enough to dig him out. Despite his frail appearance, Vultch is empowered by his newfound life. So he kills the grave robbers. Maybe he takes a couple bite out of them. (Just a couple though) and tracks down his family. Vultch has a trick pistol called Talon, which, in a pinch, can come apart to form double daggers for close range combat.

**Name Note: Vultch is names after the vulture.

So what makes the Kailos so special? How come Vultch was the only dead person to be brought back in that cemetary? It's in their blood. They don't dress like Plague Doctors for now reason. The Kailos are from a long line of special Plague Doctors. The Immune. Kailo blood is immune to every disease known to man. They treat it, and make cures for other people around the world. They try to keep their presence low key though. There are some small villages where they are a household name, however the world at large is unaware of their existence, and the existence of their gift. That is except one man, who gains a deadly obsession for the family (more on that soon).

The immune blood is what causes Vultch to reanimate and Took to bond with magic so hard. However, Shrike was unlucky. Every few generations, a member is born that isn't immune to everything. Usually it's small. Bad allergies, a harsher cold every now and then. Shrike unfortunately was born with severe blindness.

So Rave is my big bad (at least for this arc. More later). I originally wanted him to look more like the sketches I have in the book (see above). I opted for something a bit simpler, more composed, and when I add more touches, much more sinister. Rave is a failed Plague Doctor. Originally though he was quite gifted. He's been able to cure many patients, and gained many customer. However, as clients became fewer and fewer, he grew frustrated. He knew he was good, but not THAT good. Somebody else was curing these people. And permanently. Eventually he learns of the Kailo family, and their blood. Instead of anger though, or jealousy, he comes to admire them. More than that, worship them. Rave remembers why he became a doctor in the first place. Not to cure patients, but to eradicate disease. Rave then goes on a mad crusade. First he self infects himselft with every known disease, little by little. Immunizing himself. Forcing his blood to react in a manner similar to Kailo blood. This leaves him horribly scarred from countless diseases, but he manages to find cures for them all, specialized to work just for him.

Rave then begins to gain followers. He doesn't keep his newfound immunity a secret like our family does. Instead he uses it to show others this power. If he can be worshiped as he worships the Kailos, then he will be that much more powerful. Rave begins to research magic. Infecting himself. Gaining similar abilities to Took. He discovers the other dimension at this point, where a host of other monstrosities exist. These monstrosities are also carriers of some of the most deadly diseases known to man. And this is when he has an epiphany: If man didn't exists, neither would disease. The ultimate cure. (I know, tropey as fuck, but it's fun to me). And if anyone happens to survive and onslaught of these diseases, then that means they are worthy to live in this new world. He begins to enlist some of the most powerful creatures to inhabit the other dimension, The Incurables. (Need a name for the dimension).

This is where Rave creates, what he calls, The Conspiracy.

(A Conspiracy is a group of Ravens. Like Murder of crows. GET IT? I'M REALLY CLEVER)

Aaaaand that's where I'm at here. I think I have a solid foundation, I just need to figure out the fine print. I've even got a whole other arc involving Witch Doctors in insect masks. I hope y'all have some fun here, cause this is a blast for me to think all this up!

There are no comments to display.