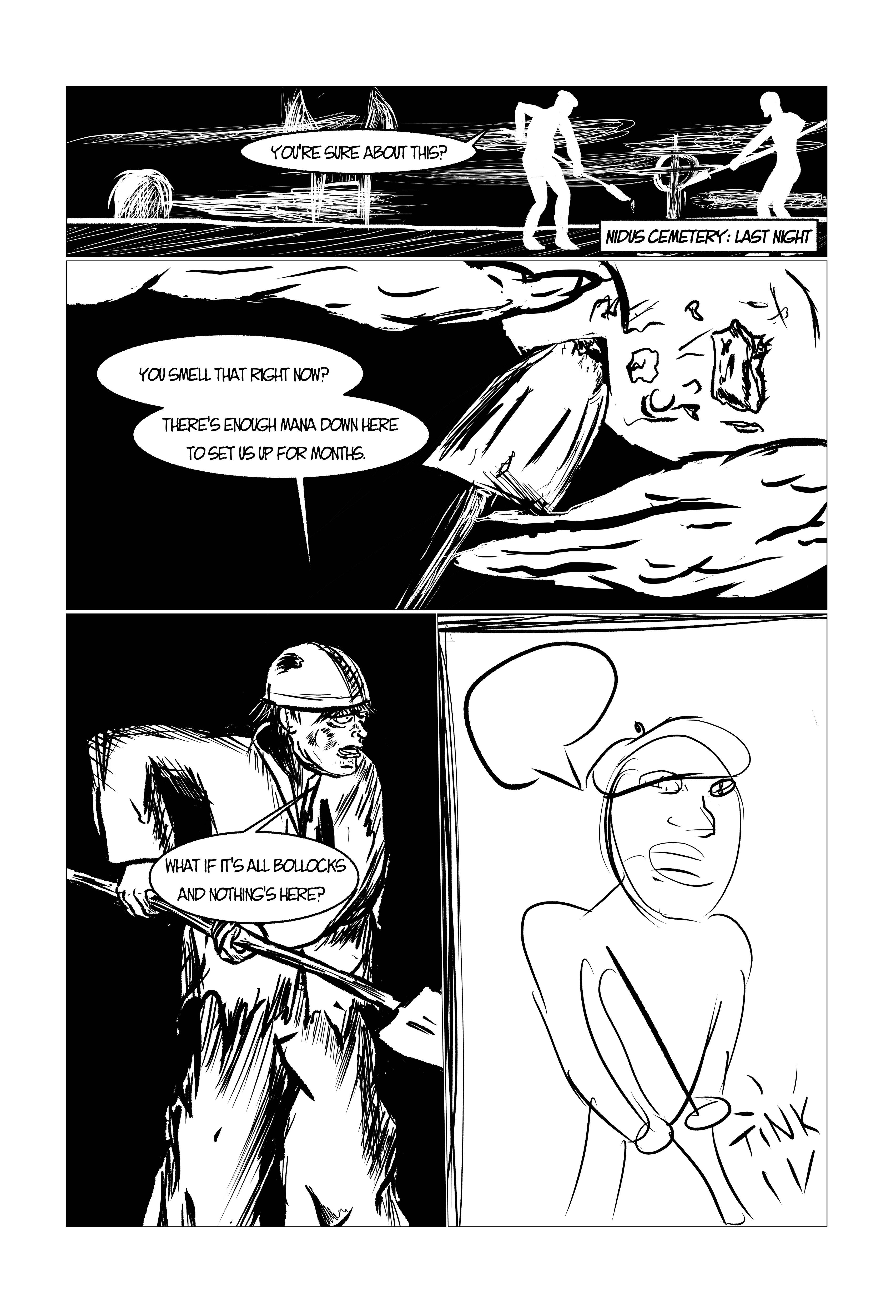 Here's a little preview of what I've got so far. I'm having fun. It's not perfect (nor will it be) but I've got a solid start so far. If y'all are interested, here is my script for issue 1. Note: I have no script writing experience, so I have no idea if that's as long as it should be, or if it's enough to crank out 20 or so pages for a starter. And it will be tweaked as I draw and place everything. Hell it's already been tweaked a little bit. More to come soon!

Dead of night in a classic horror movie type cemetery. Two men are digging into a grave. The grave has a strange shaped tombstone, with a name not yet legible. A low fog hangs over the graveyard as the men begin to talk.

Thief 1: You’re sure about this?

Thief 2: You smell that? That metallic, sweet scent in the air? That’s pure mana. The amount that was dumped on this site would set us up for months. Aren’t you sick of not knowing when your next meal is going to be?

Thief 2: Then we walk away like nuffin’ happened. There are countless scores right now, this is just too good to pass up. This body will be so full of that magic stuff though, that we’ll be able to sell it for at least 500 glint.

TINK! Their shovels hit something hard and the two men look at each other. They hoist a shoddy looking casket out of the ground, readying their crowbars to pry it open.

Thief 1: So if this is too good of an opportunity to pass up, then why are we the only ones here? Other’s have had to hear about this.

Thief 2: People been spreading stories about mana being able to bring folks back from the dead. None of it’s true though. Normally mana deposits are found in lakes, or caverns. Mined out, but not as potent. Those can net you a bit, but the mana storm that happened here was so fierce. So concentrated, people began to talk how it cursed this graveyard.

Thief 1: So absolutely no one else has thought to come and do this extraction? We’re the first ones to tap this deposit?

The men throw off the casket lid and look down. Their expressions quickly change from excited to terrified as we see the large eyes of the casket’s inhabitant. Vultch.

The men scream. Vultch leaps from his casket. The silhouettes of the men showing him attacking one of the thieves as the other one runs away. We zoom in closer on Vultch’s tombstone as it begins to rain. The dirt is washed away to reveal the name “Kailo” on his grave.

Cut to that same name on the outside of a small stone cottage. We look in through a window to see a woman hunched over a table working on something. Various bits of crude technology is adorning her home. A map on one wall, with a large X on it. A whip is next to it. The fireplace crackles nearby with a small cauldron steaming above it.

Shrike’s voice: Once upon a time our family was well known. The name Kailo used to represent a sense of promise. A name synonymous with good health and wellbeing.

A name forgotten. Or so I thought.

It’s been 6 months since I’ve seen my brother Took. My hopes of finding him began to dwindle until I finally got a lead on where he went, or rather, who captured him.

Someone remembers our family name. And if it just so happens that they don’t, then I’m going to make them remember.

In between Shrike’s monologue, images of her gathering her gear is shown. She looks up at a family portrait, her mother and father sitting down. A young Shrike standing next to her father holding his hand, and baby Took on his mother’s knee.

Shrike turns and swings the door open. A harsh wind blows into the house, whisping out the fire and darkening her home as she walks off to save her brother.

The scene shifts to a man filling up a syringe with a brightly colored liquid. Starting with a close up of the syringe in his hand. The scene zooms out to reveal Took chained to a wall. He is shirtless, his veins are protruding, he is breathing heavily and is sweating.

Cultist: I hope you know how valuable you have been to us these past few months Mr. Kailo. When we found out who you were and who exactly your family was, well, to say we were excited would be an understatement.

The cultist flicks the syringe as he grins slightly.

Cultist: Mr. Kailo, lucky for you and the rest of us. The cultist walks over and pushes Took’s head to the side. The party is only just beginning.

The cultist brings the syringe to Took’s neck. The needle breaches his skin into a thick vein. The cultist’s thumb moves to the plunger, and just before he can press down, he hears a loud crash coming from the other rooms.

Grunting, yelling and violent sounds emanate from unseen corners of the building.  Getting louder and louder as a would be intruder gets closer to the room.

The cultist’s eyes widen and he lets go of the syringe, letting it stay in Took’s neck, mana still in the barrel. He reaches for a small sickle and approaches the door.

Shrike on the other side of the door: TOOK!!

The door explodes open and splinters into pieces. Shrike stands in the doorway and watches as the cultist raises his arm and runs at her. She turns and dodges his attack. Shrike quickly wraps her whip around his neck. With one swift pull she throws her assailant in the stone wall, cracking his neck and smashing his skull against it, killing him instantly. She wraps up her whip and walks toward Took.

Took: ‘Bout time you got here.

Shrike: Not now, we need to get you moving.

Shrike presses her thumb, encased in a metallic gauntlet, against Took’s chains. A liquid secretes from the point of her thumb and onto the chains, dissolving them and freeing Took.

Shrike: Save it, more are coming.

Shrike hoists Took’s arm over her shoulders and begins to drag him to the door.

Took: You’re gonna have a lot of talking to do when you get me home.

Shrike: You’ll hear it all whenever we get a chance. But we need to hurry the hell up. There’s more going on than you even realize.

Took: Ah, yeah… what possibly else could there be than a bunch of mental religious types injecting me with Gaia knows what?

Shrike: Well, he’s not as dead as he used to be. And we need to find him.

There are no comments to display.